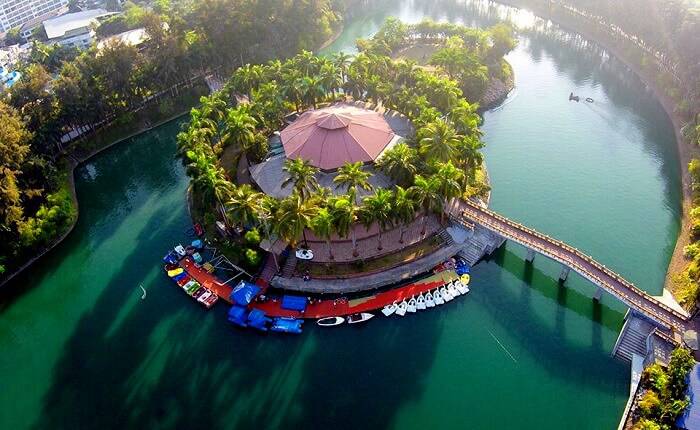 Daman city is the wonderful exotic beach location, present at East side in India. Daman district is one of the two districts of the union territory of Daman and Diu on the western coast of India and it is surrounded by Valsad District of Gujarat state on the north, east and south and the Arabian Sea to the west. It is just 121.3 Km from Surat, Gujarat and 176.9 Km from Mumbai.

At first, the Portuguese Diogo de Melo arrived at the spot by chance in 1523, when heading towards Ormuz as he was caught in a powerful storm during that time caused he had his boat blown towards the coast of Daman. After several time, it was settled as a Portuguese colony over 400 years and Daman was incorporated into the Republic of India in December 1961 after a war between the Portuguese and the Indians. The war left four Indians dead and 14 wounded and Portuguese casualties were 10 dead and two wounded.

Daman is the beautiful tourism spot with different locations as –

It is best clean beach in Daman. There are also lots of activity for kids like horse riding, camel riding and paragliding. You can also enjoy many water sports activities like Jet Ski riding and etcetera.

It is dedicated to Bom Jesus, an old shrine, located in the Moti Daman region of Daman and its construction was started in 1559, and its consecration took place in 1603. It used to be a parish church during the early days of Portuguese settlement.

It is the small garden just outside the Fort Gate adjoining the river mouth. It has well maintained play area for kids for slides, swings and other playing installations.

It is the bigger fort which was built in Moti Daman in the 16th century dedicated to St. Jerome to guard against the Mughals who ruled the area until the Portuguese arrived and today, it is using for municipal government offices. The front view of this fort has a Portuguese carved cross, sculpture of St. Jerome, carvings of two men and Portuguese inscriptions.

The specialty of this temple is exquisitely and intricately designed and decorated inner walls with 18th century murals art which represents the life of Mahavir Swami who is considered to be the founder of Jainism religion.

The Nani Daman Fort is also one of the most magnificent sites in Daman and elegantly laid out with high stone walls. It is surrounded in an area of 12,250 sq. meters.

Along with above top six, you can enjoy many more stunning places in Daman for perfect relaxation and make yourself stress free. Daman is one of the most favorite tourists spot in India for your perfect holidays and you can easily online book your hotel through ClearTrip.com website or app by searching lots of best options available to stay in Daman at Cleartrip along with comparison of best prices and locations for short or long time stay.